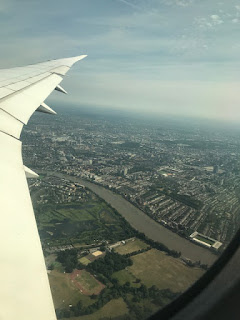 Greetings from across the pond! That's right I am in the UK this month. I have loads of family still residing in both Ireland and England so it is nice to be able to come over for a visit. So far I have spent about 5 days around and about London (Wow! What a big and busy city!) size and bustle-wise it definitely rivals New York City, it even seems that it may be bigger but maybe that's just because I am not as familiar with it as I am NYC. As with any big city there is tons to see and do, the weather surprisingly has not been too rainy. We had one day of torrential downpours and all others have either been completely perfect or a tad on the warm and humid side, although nothing like New York in the summer (also much less stinky!) 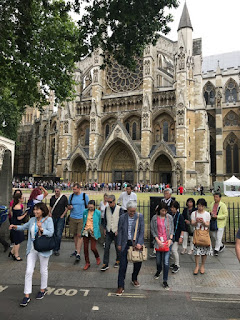 So far I have seen Westminster Abbey. Talk about a building full of dead folks! I literally could not walk 2 feet without being on someone's grave, it was a little unnerving at first. We did find Stephen Hawking's grave which was neat. There is also a poets corner which I rather liked. 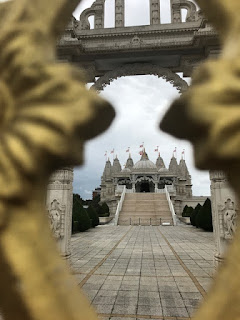 Shri Swaminarayan Mandir (the largest Hindu temple outside of India). This was an amazing off the beaten path find. It is a little outside of London and absolutely beautiful. No interior photos are allowed which is kind of nice because you have to be in the moment, enjoying the rich culture and history that is Hinduism. We walked the main "chapel" area where the gods and deities reside, I found it to be a very spiritual and special time. In the downstairs of the building is a really great exhibition that explains what Hindu is, I completely enjoyed myself. There is also an Indian restaurant and grocery store across the street so of course I had to pop in for some proper indian food (totally worth it!) 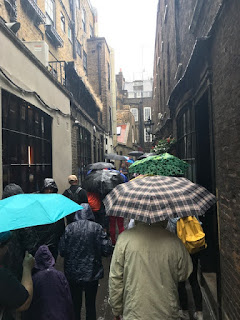 Later that day we got to go shopping at Harrods and the following day we did a Harry Potter walking tour through the city (in the pouring rain).  The walking tour was loads of fun despite the rain. Our guide was knowledgeable about HP of course but also about the city itself. Some of my favorite non-HP takeaways were seeing the Globe theater and also the Borough market a huge open air market that has been in operation since around 1020AD!

We got to see Windsor Castle from the outside, the lines were nuts! So we skipped the tour, it was neat because the queen was actually there that day. 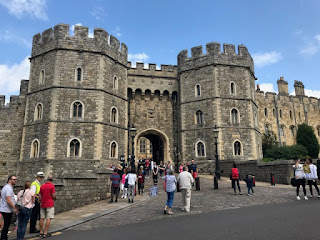 We instead strolled around the town of Windsor, we also visited a little village called Denham Village as that is my maiden name so of course we HAD to take a peek. (it's won awards for being the best kept village multiple years!) Sunday we were aiming for a lazy day and I thought a walk through Hyde Park would be just the ticket before heading to a small local blues fest in another park later that day. BTW soft serve ice cream here is called Mr. Whipee, HA! 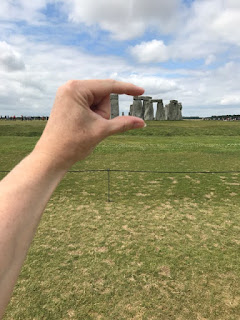 On Monday we packed up the London Flat and headed for the countryside stopping off at Stonehenge first or course, which was magnificent! There is so much more to this place than just a bunch of big stones mysteriously placed. It was built over a very long period of time and by many different groups of people, it makes me wonder what about this place is so special. It certainly felt like a very special place to me.

After that we headed to our cousins country house in Bristol which is just lovely. It is quiet and spacious which is a nice change from the city as always. We barely set our suitcases down and were whisked off to see our younger cousin play in a cricket match! Now- I am not sure, dear reader, if you have ever seen a cricket game but I have not. I liken it to being vaguely similar to baseball with less bases and more rules.... 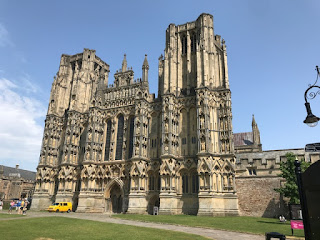 Yesterday we met MORE cousins which was lovely and went to the town of Wells where much of the movie Hot Fuzz was filmed. It was so cool walking the streets that a movie I like has been filmed on. After a quick refresh in the pub we did a driving tour of a super hippie dippie town called Gloucester which apparently has roots in the King Arthur tales (I need to get myself back there someday). We then drove through Cheddar gulch. It was really beautiful and there are these cute little wild sheep that hop all around on the rocks and eat all the grasses. This is the home of cheddar cheese as I am told because there are many caves around the area which are perfect for ageing cheddar in. I love cheese and was sad we didn't have time to stop and sample it (all). It just gives me an excuse to stop back ;)

WHEW! Gosh that was a lot! I am a bit tired today so I vetoed doing any activities today in lieu of just lounging around (a girl needs a break!) Tomorrow we will be back on track with more fun and adventures with family so that will be nice. I leave you with a few pictures, enjoy.....

Where are everyone's summer vacations taking them this year?