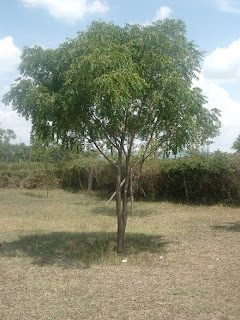 In this fascinating industry there is always something new to learn about. I heard about neem oil quite some time ago and even bought some to experiment with but somehow never got around to it until recently. There was recently a fantastic article in an online magazine I subscribe to called Saponifier (edit: 2020-Apr-27 now called "Soap Making Magazine")  on neem oil. That was my inspiration to get in gear and play around with this magical ingredient.

The neem tree is described as an evergreen which is native to India, this is a vegetable oil which is extracted from the tree as opposed to a nut oil. This oil has been used for a very long time as antibacterial, antiviral, anti-fungal and insecticide. It can also soothe irritated skin and I have seen it in products which are formulated to help with acne too.

An ingredient this great should really be in more products, don't you think? Well I thought so and set off on my little adventure with the elusive neem oil. I will say this, it has a VERY distinct scent, very strong and not particularly my favorite scent for sure. But like with many things that are good for you they sometimes smell or taste not so good, broccoli comes to mind (yuck!).

I made a simple soap, small batch because I am just experimenting at this point. The article in "Saponifier" said that it is most effective when used at a rate of 20%-40% so I went with the lower end of that and used it at a rate of about 25% to start with. Since this is such a healing oil I wanted to make sure my other oils would be very complimentary so I also added some shea butter and other totally skin loving oils and to finish it off some lavender essential oil. I was hoping the lavender would help cover some of the scent but also lavender is a wonderful and healing essential oil.

This soap got very hot in the mold and hardened fairly fast too, it was interesting. The next day I unmolded and was inspecting the soaps, they smelled faintly of.....peanut butter??? It's kind of peanut butter colored too. So strange, a few days later that scent is dissipating and I swear I can smell a tad of the lavender.

All in all it was great working with such an interesting ingredient, I look forward to sampling the soap and seeing how the scent ends up working out in it too. 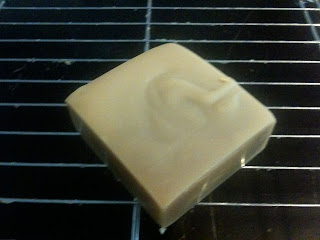 Well this soap has a few weeks to go before I can really take it for a spin, I will update once I try it out.

Until then stay bubbly my friends,