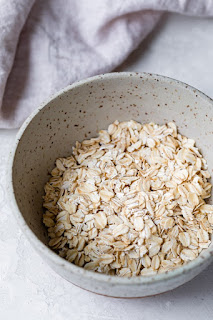 Howdy Soapsmith Nation! I am working on some new recipes with additives I have been wanting to try out. After 10 years of making my tried and true recipes I have decided it's time to, once again, spread my wings and make some new awesome recipes!

I wanted to work with oatmeal for a recipe so I decided to make it into oat milk first. Let's take a step back and look at the skin care benefits that oats can impart for us.

Some talking points that may not carry over into soap but are relevant to other skin care formulations are:

I would be more interested in adding colloidal oatmeal to a lotion or butter to see if I could get these results. As an aside this would make a wonderful set, a lotion and soap both with various forms of oatmeal in it.

I also looked into what oatmilk/oatmeal might do for a soap formulation and what I found is not that much so I changed gears and looked up some nutritional value in hopes to find properties that may come through in a soap.

1. sugar content - 1.1g per 1 cup - might contribute to more bubbles (may also not be enough to make a difference.)

2. gluten content - this is tricky, technically oats ARE gluten free but if they are not processed in a gluten free facility they shouldn't be marketed as such. I am starting to see more people asking and searching for gluten free soaps so this is a good point to remember.

4. fat content - 3.2g per 1 cup- maybe slightly relevant as it could contribute to superfat but probably not in a significant way.

5. sodium content 115mg per 1 cup, we do know that salt can contribute to a harder bar of soap so this might also be helpful, but again based on how small of an amount it is it's probably not significant.

There are also vitamins A, B, C, Iron and Magnesium listed, there properties will most likely not survive saponification though.

Alright so now we know what oats can bring to this party, let's make oat milk!

I combed through the internet and saw many variations on how to do this. Many of them had similarities so it makes it kind of easy to give this a go. In the end I decided to use a loose version of what it on the actual oatmeal container and see how that worked out. 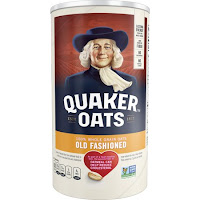 As a side note pretty much all recipes recommended using old fashioned oats as opposed to steel cut or instant and all recommended blending immediately instead of letting soak because it makes for a slimy mixture (this is probably more relevant to the folks that want to use it in coffee).

Here is what I did:

4C water (recommendation to use distilled for soap making).

1. Add water to oats, mix with spatula then hand blend for about 30 seconds. Let sit for roughly 30 minutes to thicken.

After 30 minutes it was a thin porridge consistency and I was happy with the size of the oat pieces.

I stepped away for approximately an hour to handle something and then it became more like a thick porridge which I did not want. This may have worked to my advantage because I determined that I wanted oat milk and not oat porridge for this project. So I went ahead and strained the milk with a wire strainer and it became a nice, thick milk with some pieces which will be great as an exfoliant.

I managed to pull off about 1C of oat pieces (grains? I don't know 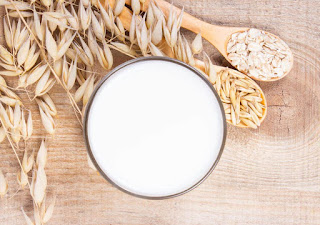 what to call them now). Which left me with about 1C still in my oat milk. For me this is very doable.

I weighed out and froze the portion of oat milk I will need for the upcoming soap recipe. I also set aside the extra oat....pieces as I can add them back in to my recipe as an additive.

Ok so stay tuned for part 2 of this little adventure when I reveal my recipe and we make a super sweet batch of oat milk soap!